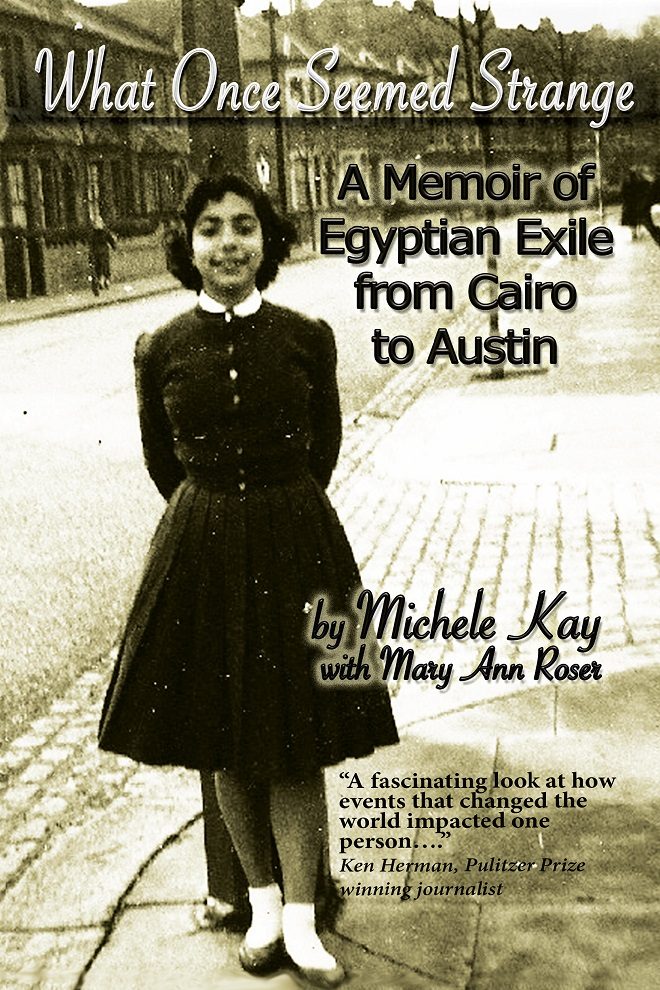 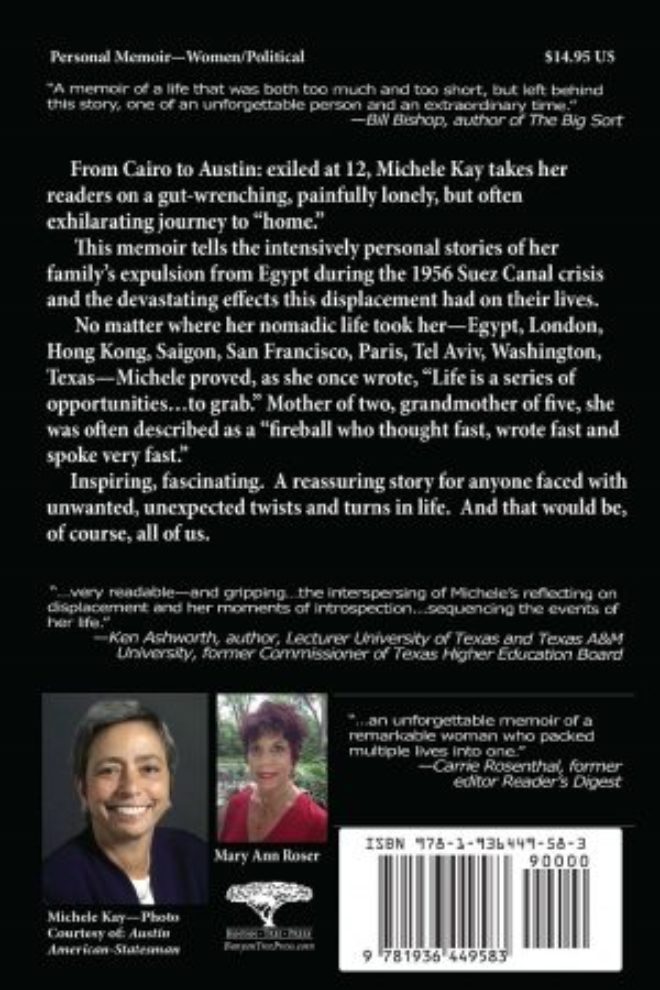 What Once Seemed Strange

From Cairo to Austin: exiled at 12, Michele Kay takes her readers on a gut-wrenching, painfully lonely, but often exhilarating journey to “home.”

Through this memoir she tells the intensively personal stories of her family’s expulsion from Egypt during the 1956 Suez Canal crisis and devastating effects of this displacement on their lives.

No matter where her nomadic life took her—London, Hong Kong, Saigon, San Francisco, Paris, Tel Aviv, Washington, Texas—Michele proved, as she once wrote: “life is a series of opportunities…to grab.” Mother of two, grandmother of five, she was often described as a “fireball who thought fast, wrote fast and spoke very fast.”

Inspiring, fascinating: a reassuring story for anyone faced with unwanted, unexpected twists and turns in life. And that would be, of course, all of us. 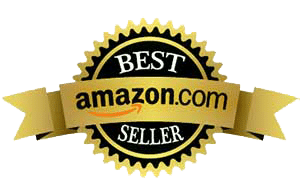 Be the first to review “What Once Seemed Strange”

“…Michele Kay, a life that was both too much and too short, left behind this story, one of an unforgettable person and an extraordinary time.” --Bill Bishop, author of The Big Sort

“…very readable—and gripping…the interspersing of Michele’s reflecting on displacement and her moments of introspection...sequencing the events of her life.” --Ken Ashworth, University of Texas, professor, author, lecturer

“…an unforgettable memoir of a remarkable woman who packed multiple lives into one.” --Carrie Rosenthal, former editor of Reader’s Digest Condensed Books

If this were fiction, no one would believe she lived this life...

Michele Kay's life was far too short. I'd like to know much more about some adventures she only had time to mention, oh, so briefly. I'd like to know about her times as reporter in Asia, how she learned fluency in English.

Her best work, after she earned college degrees relatively late, may have been as mentor/teacher to journalism students at St. Edward's University, Austin. She could concentrate on each individual student, LISTEN to the student, find ways to encourage each one. Her brain tumor took her life, but not her legacy. Her widower and friends honor her with this book.

5.0 out of 5 stars An Extraordinary Story of Grace Under Pressure, December 27, 2013
By Eno fan (Berkeley, CA United States)

Michele Kay's journey is an international saga filled with courage from start to finish. An extraordinary journalist, born in Cairo, who reported from such distant points as Hong Kong and Austin, Texas, Kay was a rare combination, a woman who accepted no runaround from the powerful, yet had such a gift for friendship. She died way too young of a brain tumor, a condition she faced with her usual fortitude, wisdom, and humor. This book, published after her death, chronicles her extraordinary life of exile and--finally--her discovery of a sense of home.

Like a good novel, Michele Kay's memoir of exile presents a mystery for the detective-reader to solve. There are enough hints along the way to make you comfortable with your conclusion until the ending unveils the surprise you didn't expect. Then, even the title assumes a new meaning. As a military brat I could readily identify with Michele's rootlessness and loss, though hers had the special shock of being forced by politics. I thought I knew her when she was alive, to the extent that any of us knows anyone (including ourselves), but I feel much closer to her truth now. All in all a worthy memorial to a loving person that's also a good read. Even if you never met Michele, her story is worth your time and money.

Once you start this memoir, you will want to finish it in one sitting. I loved the intrigue of why the family was so abruptly exiled, made to leave at gunpoint from a comfortable apartment in Cairo. What in the world had they done to elicit such a forced exit? The authors keep you strung along until the very end--no spoilers from me for sure! You will just have to find out for yourself. This memoir also answered many of the questions lumbering around in my mind about what happens to people who are forced to "get out" of their home, their country, leaving behind all things familiar. Each family member's reaction varied wildly. For the author it was defining--not easy at all, but defining.

Michele Kay was obviously quite a force and as a reader I was swept along with her determination to succeed, to tackle the loneliness of exile and then to attack the last battle of her life--a brain tumor--with inspiring vigor.

Worth a read. Kay has an interesting tale to tell about her transition from a vastly different cultural setting to her new life in Austin, Texas.