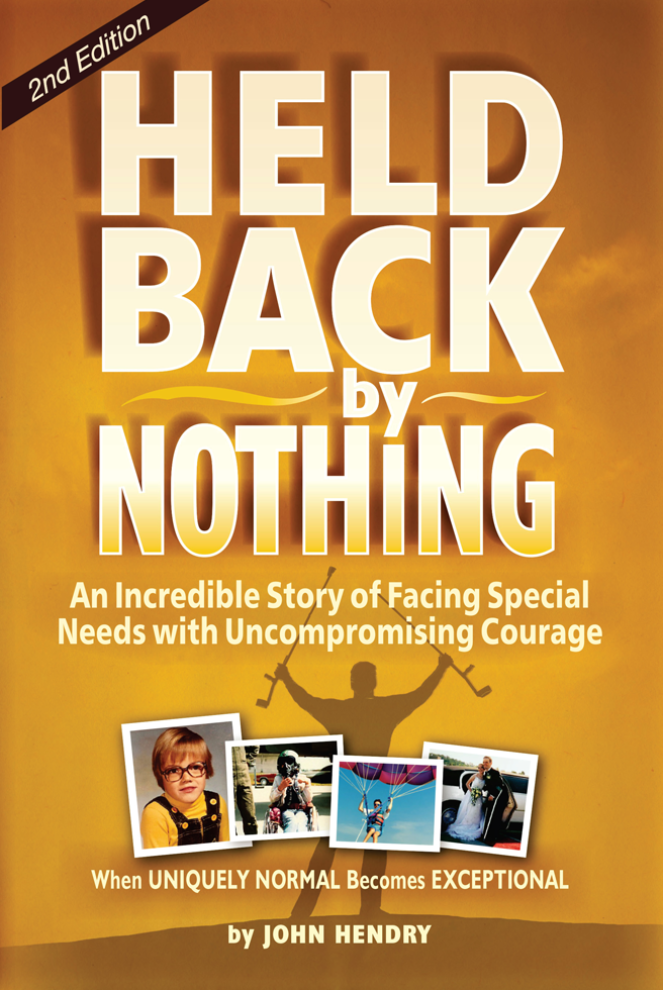 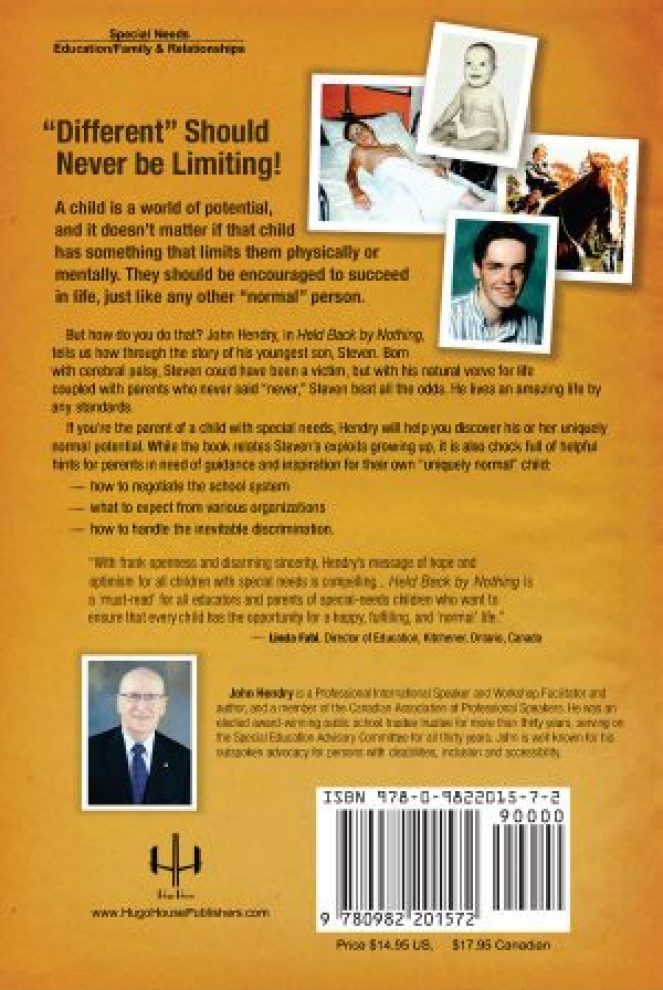 This is the new 2nd Edition – with updated images and story.

“Different” Should Never be Limiting!

A child is a world of potential, and it doesn’t matter if that child has something that limits them physically or mentally. They should be encouraged to succeed in life, just like any other “normal” person.

But how do you do that? John Hendry, in Held Back by Nothing, tells us how through the story of his youngest son, Steven. Born with cerebral palsy, Steven could have been a victim, but with his natural verve for life coupled with parents who never said “never,” Steven beat all the odds. He lives an amazing life by any standards.

If you’re the parent of a child with special needs, Hendry will help you discover his or her uniquely normal potential. While the book relates Steven’s exploits growing up, it is also chock full of helpful hints for parents in need of guidance and inspiration for their own “uniquely normai” child:

Title: Held Back by Nothing: Overcoming the Challenges of Parenting a Child with Disabilities, 2nd Edition 2019
Author: John Hendry
ISBN Trade Paperback: 978-0-9822015-07-2

John P. Hendry is not a “technical expert” when it comes to children with special needs. His expertise has been developed over many years of hands-on experience. For more than twenty years he has been an elected school trustee on one of Canada’s largest public school boards. Throughout his entire twenty-one years as a trustee he has been a strong, outspoken advocate for all children with challenges serving on the board of the Special Education Advisory Committee (SEAC). His commitment to special education and advocacy role was recognized in Canada by the Province of Ontario with a Cabinet Appointment to the Minister’s Advisory Committee on Special Education, a position he held for the maximum six-year term. The Advisory Committee consults the Minister on all matters related to the delivery of programs and services to children with special needs throughout the Province of Ontario. Its membership was all-inclusive and included teachers, principals of both elementary and secondary schools, directors of education (superintendents), members of virtually every special needs association, doctors, aboriginal representatives, trustees, Ministry of Education representatives, and various paraprofessionals.

As a writer, he has a broad spectrum of experience. His accomplishments include a published article in Hockey Magazine, a US based publication, The Hockey News, Hockey Journal, and a two-year term on the community editorial board of a daily newspaper in Kitchener, Ontario.

As a member of the Editorial Board he contributed regular columns and editorials. He has also written a paper comparing trends in the United States and Canadian educational systems, presented at Cal State University in Pasadena, California.

His passion for becoming an advocate for children with challenges was due in part to his youngest son being born premature with cerebral palsy.

Writing a practical, non-technical book for parents of children with disabilities has been a goal of his for many years. Who else but a parent of a child with challenges is in a better position to offer guidance and help to other parents facing the same future? As a professional speaker, he is a member of the Canadian Association of Professional Speakers and the International Federation for Public Speaking. He has addressed groups in Japan, the United States, and Canada. He continues to advocate on behalf of parents of children with disabilities and special education programs and services and most recently was a featured presenter at the Pacific Rim International Conference on Disabilities.

Be the first to review “Held Back by Nothing – 2nd Edition”

Held back By Nothing is a wonderfully engaging real life success story. It is a heartwarming tale told truthfully and honestly by a parent..... From having your worst nightmare happen with your child and then embracing his disability with a non-defeatist attitude throughout his life to watching him succeed as an adult. I personally remember meeting Stephen with my two young sons when he was working at The Gap. As a parent you always wonder what youngsters might say when they interact with someone with an obvious handicap. My kids only commented on what a neat guy he was and that he was better at picking out clothes than I was!

I Have Been to Minneota

Common Sense is NOT Common Practice