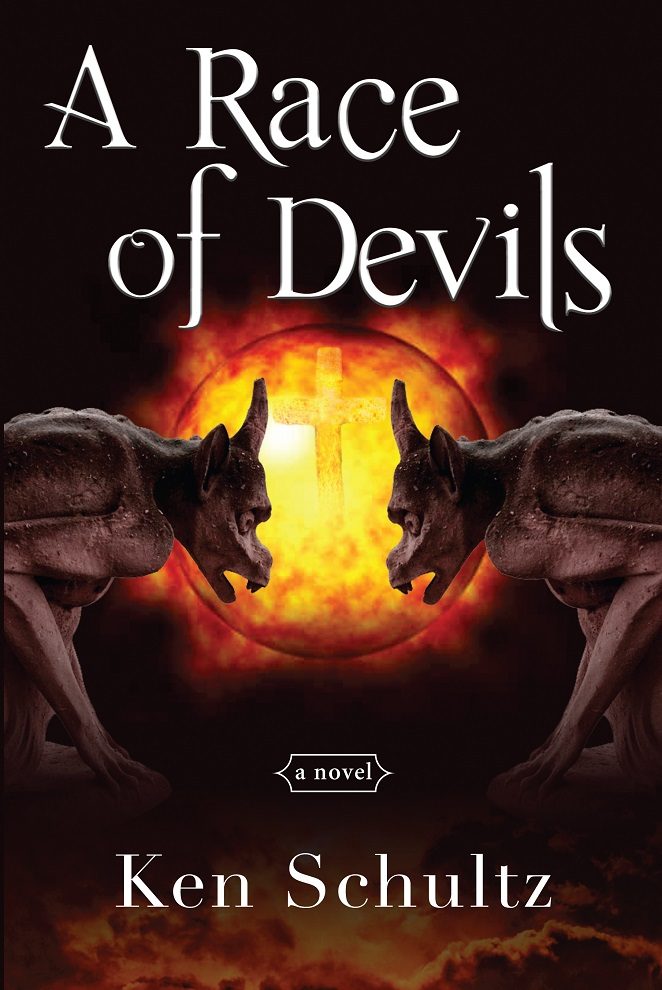 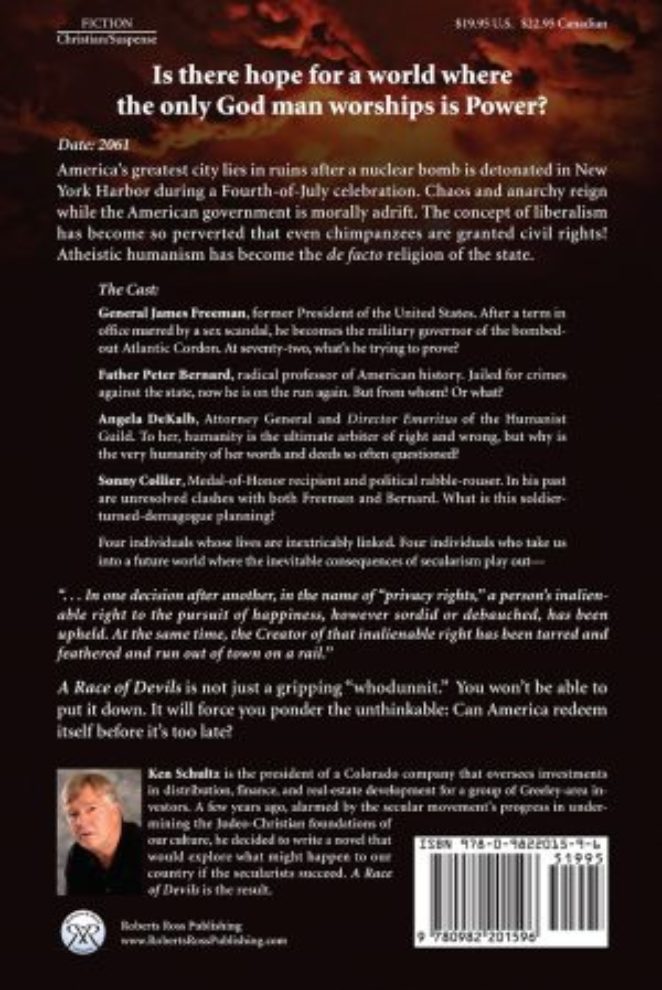 America’s greatest city lies in ruins after a nuclear bomb is detonated in New York Harbor during a Fourth-of-July celebration. Chaos and anarchy reign while the American government is morally adrift. The concept of liberalism has become so perverted that even chimpanzees are granted civil rights! Atheistic humanism has become the de facto religion of the state…A “Race of Devils” is not just a gripping “whodunnit.” You won’t be able to put it down. It will force you ponder the unthinkable: Can America redeem itself before it’s too late?

A Race of Devils tells the story of a former President of the United States, General James Freeman, whose term of office was tainted by a sex scandal. In 2061, after New York City is devastated in a nuclear attack, he returns to public service as the military governor of a multi-state area under martial law called the Atlantic Cordon. His appointment is controversial: most people think that, at seventy-two, General Freeman is too old to handle the Herculean task of controlling the flight of the refugees, delivering aid to the areas hardest hit, and restoring law and order. From the start, he is haunted by past vanities and misjudgments and, before long, his hopes for personal renewal and glory are laid waste by the emergence of a new threat, this one of his own making.

Here is your portal to a godless America where the secular humanists ride herd over its culture and politics. But the attack on New York opens the door to a new menace, and one bold man steps through it on his way to building a new world order. In him, the Nietzschean vision of the Superman is realized.

Be the first to review “A Race of Devils”

What a great story! What a scary scenario if it comes to pass, especially form the viewpoint of a New York area resident. Fast-paced and gripping. Make sure you have some time because you won't want to put it down. It's filled with irony, symbolism, humor and, though it deals with some very serious topics, a message of hope. One of my favorite things about the author's style is his way of "summing up" a chapter with thought provoking endings that are right on the mark, leaving you wanting more. Another is his understanding of politics, world affairs, religion, human nature and an (unsettling) insight as to where we might be headed.

A Race of Devils is definitely a page turner. The author has depicted a possible situation and how government might react. He has intertwined the characters to keep your interest and the pages turning. The Christian influence is weaved throughout the book but it enhances it and allows you to draw your own conclusions on right and wrong, power and authority. I truly enjoyed this book and would recommend it everyone. Good book for book clubs.

Just finished my second read of A Race of Devils. I read it the first time for the simple joy of a suspenseful plot that bumped Dan Brown off my top-author list. I read it second time for the lessons this book offers in complex plot and character construction. The author's depth of knowledge of all things historical and religious is the solid foundation of his ability to give life to a frightful future world that awaits us all if we trade the Judeo-Christian foundation of our culture for the secular cult of self-gratification. As Charles Dickens did in his time, and George Orwell did in his time, Ken Schultz has crafted a cautionary tale for this 21st century that is a must-read for everyone who cares about the world our children will inherit. Kudos Mr. Schultz.

This review is from: A Race of Devils (Kindle Edition)

This book was an absolute delight on so many levels. An affable storyteller, the author does a magnificent job developing characters that are colorful and about whom the reader starts genuinely caring. While the book represents a fairly easy read on a surface level, the background information is built on a clear understanding of church history. That the plot develops into one of intrigue and even suspense is perhaps no surprise. However, the work of taking circumstances and moral dilemmas that confront us in our lives today and blending them into these literary techniques is very well done and lend themselves to a fascinating work.

A penetrating, astute, and even disturbing, page-turner that offers a futuristic scenario in our post-9/11 era. Constantly threatened with imminent, even home-grown, terrorist attack, and concern about a country whose moral compass is spinning wildly, this plot is not only plausible, it is likely. Debuting only months after the publication of editorials in the Wall St. Journal (5/26/10) and the NY Times (5/28/10) regarding the generation of the "first synthetic cell" in a laboratory setting, the book is all too timely. We are no longer in the "if", but rather, the "when" epoch.

It previews a world where science triumphs, and man is the universal be-all and end-all.
Constitutional and human rights collide.
Basic tenets of the foundation of our country and constitution are stretched and twisted as a means for the gratification of its citizens.
The moral "line in the sand" is drawn, and crossed.
And, God is beyond dead....He is forgotten history to most.

The characters, well-developed and believable, struggling with power, political conflict, and moral boundaries, are emotionally riveting. They use strife as a means to override civil liberty, and civil liberty as a means to gratification. They provide examples of the best and worst of human nature.

Unsettling as the story may be, the solution it poses is, actually, quite simple.....returning to the roots that made this country strong and honest, and ordered by a power far greater than the sum of its citizenry or its legislation. For, in the words of our veterans, "Freedom is NOT free....."

The background references to history and literature create an intelligent work of fiction that borders on probability. This book demands a second read.....before the movie premiers!

This review is from: A Race of Devils (Kindle Edition)

I really enjoyed the diversity of government, military and church. I was definitely not able to anticipate what would come next.